The PVIWC participates in 4 or 5 St. Patrick's Day parades each year, and a few at other times of the year, as well. Prospective club members are welcome to join us in the fun! We can always use help holding the banner (kids are especially good at this) or helping someone who brought multiple hounds. The PVIWC is proud to hold several awards for best dog unit in the DC and Alexandria parades!

Feel free to contact the club This email address is being protected from spambots. You need JavaScript enabled to view it. if you need any more information concerning any of these events.

Photos of events can be found here.

The first is usually held in Alexandria, Virginia on a Saturday about two weeks before St. Patrick's Day. We meet near the corner of Peyton and King Streets around 11:30 am. The parade starts at 12:30 and goes down King Street towards Market Square. For more info on the parade see the Alexandria parade website, for more info on the city of Alexandria, see the city's website (it has maps). Parking in Old Town can be challenging, so participants try to get there early. We usually go to Ireland's Four Courts in Arlington (2051 Wilson Boulevard, 703-525-3600) afterwards for lunch and a pint or two.

The next parade is on a Saturday before or on St. Patrick's Day in Gaithersburg, Maryland. We meet at 9:00 am, and the parade starts at 10:00. For a map and detailed information see the Gaithersburg parade website.

Usually on the same day as the Gaithersburg parade there is also a parade in Manassas, Virginia. We meet at 9:00 am in Old Town Manassas near the corner of Litho Lane and Quarry Road. Parade officials recommend that you park near the parade end at Center Street and West Street and walk back to the staging area. The parade time is 11:00 am. For detailed information see the Manassas parade website.

The biggest parade is the one held in Washington, DC on the Sunday before St. Patrick's Day. The meeting place is the carousel in front of the Smithsonian castle, around 11:00, and the parade starts at noon. We suggest parking near the State Department, somewhere between 17th and 23rd Streets and between Constitution Avenue and E Street, security permitting. This site has links to maps of the Mall area for those who need them, and the DC parade website has additional information. This parade is longer and larger than the Alexandria parade and usually draws more IWs. PVIWC is an inaugural unit for this parade, and has marched proudly every year, regardless of the weather! 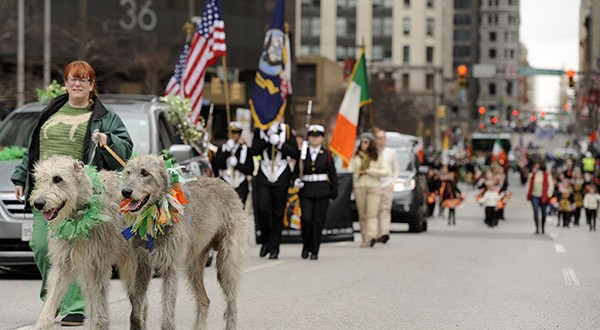 Jodie and her dogs (Corky and Kelly) during the Baltimore St. Patrick Parade 2014.

PVIWC also participates in the parade in Baltimore, Maryland, which the same weekend as the DC parade. The parade starts at 2:00; we need to be in line at least an hour before that. See the Baltimore parade website for more information.

The Easton, Maryland parade is usually held on the 17th, and some PVIWC members participate informally. Easton is not a big town; meet in town and follow the folks lining up for the parade. Ask anyone in town where the beginning is and they will be ever so helpful.

The Harrisburg, Pennsylvania St. Patrick's Day parade on the Saturday after St. Patrick's Day. Participants need to be in position by 1:15. More information is available at the parade website.